What if I told you there is a single effect that can deliver more visual impact from your renders, allowing you to redefine reflection, highlight, and shadow with the contours of your scene objects. Create photoreal fabric and glass shaders, and enhance skin with subtle, flattering effects that render in a fraction of the time of subsurface scattering. Well it’s all true. It’s called Falloff, and it’s not included with Carrara but probably should be.

Falloff is a value based on the viewing angle of the geometry to another point in 3D space, usually the camera. Polygons that face the camera receive a high value, while polygons that angle their surface away from the camera are given a lower value. You will often see the term fresnel (pronounced fra-nell). Generally, fresnel is used when discussing transparency and refraction while falloff refers to color or glow, but for our discussion the two words are more or less interchangeable.

As of Carrara8.5 there is no falloff shader included with Carrara. Fortunately we have several choices with plugins. Digital Carver’s Guild offers a simple Fake Fresnel shader with SHADER OPS. SHOESTRING SHADERS adds the more sophisticated Fresnel and Angle shaders. Sparrowhawke3D recently updated the Laboratory plugins for Carrara8.5, including a free Edge Falloff Shader. 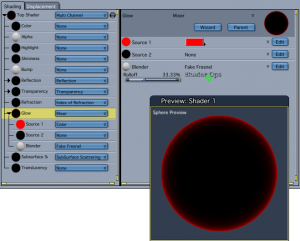 Fake Fresnel in Shader Ops will always “point at” the rendering camera, but the Shoestring Shaders are more versatile allowing any scene object to be the “point at” object. All the examples in this article use the simpler Fake Fresnel shader. Links to the plugins are at the end of the article.

Let’s start with a simple falloff in the glow channel. See how the cherries “pop” from the dark background? They almost seem to float in space in front of the screen. This is because the extra contrast separates the layer from the background. If we were seeing this in real life, there would need to be empty space behind the cherries to create this kind of “light wrap” effect. Our eyes perceive the fall off as depth, as well as adding a kind of glossy highlight all around the curved surfaces. Use this trick anytime you want to make an object jump out and grab attention.

Instead of “popping out” of the screen, falloff in the Reflection Channel can help embed an object into your environment, especially when using an hdr background to wrap your scene. Hard surfaces made of metal or glossy enamel coatings start to reflect at oblique angles, even if they don’t have a highly mirrored surface. Airplane wings, automobile hoods, chrome bumpers, stainless steel tools, and ceramic-tile countertops are objects that will show more reflection when viewed edge-on. Adding falloff in the Reflection Channel also creates a better light wrap on hard surfaces when using hdr backgrounds and image-based lighting. 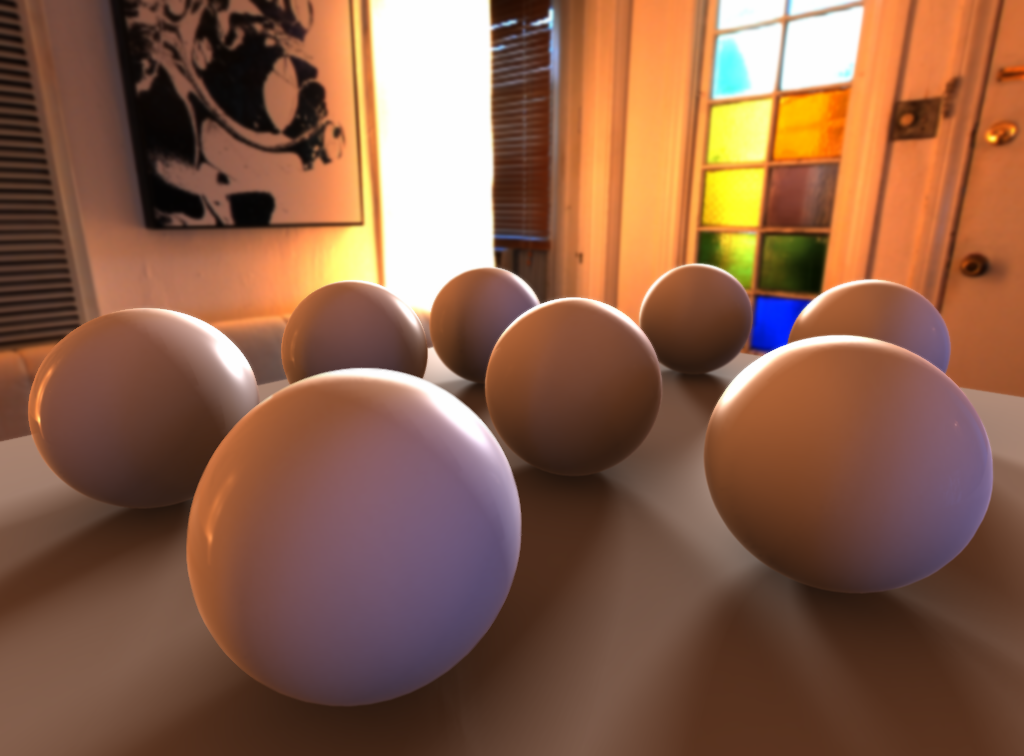 Glass can be one of the most challenging surfaces to render in 3D. Even with extra lights and heavy refraction the edges of glass objects can easily disappear. A thin, bright, edge falloff glow gives glass more “presence”. As above, falloff in the reflection channel can also be added for additional photorealism. 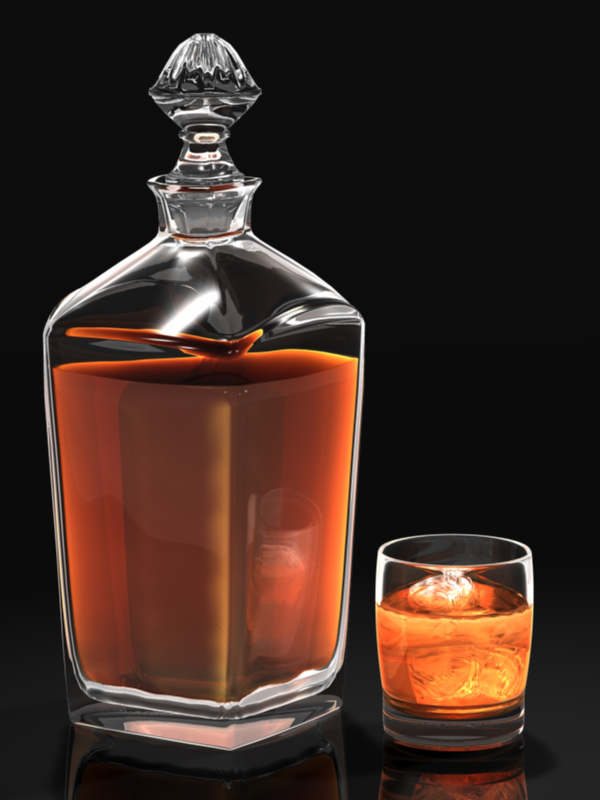 What harem or boudoir would be complete without tantalizing layers of transparency that tease like the Seven Veils…? Fabric that reveals, and hides. The thinnest of barriers to tease a the passions…. Apply falloff in the Opacity or Transparency channels for shear drapes, bridal lace, fishnet and nylon stockings… and of course silk harem girl outfits. 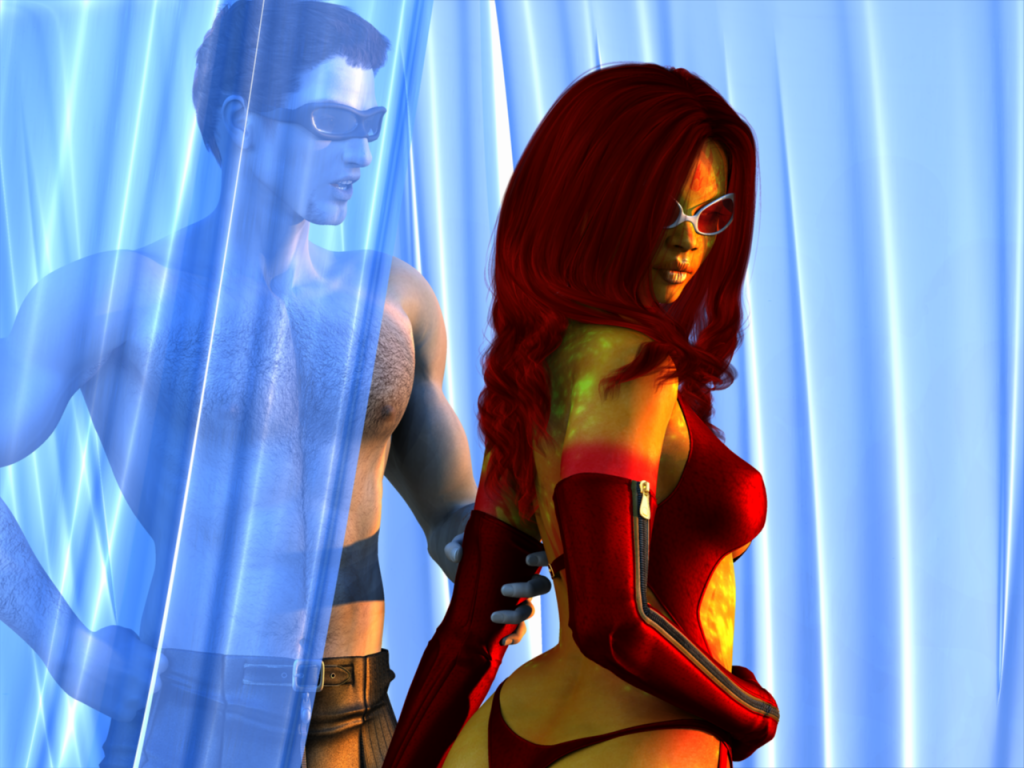 Velvet is a different kind of fabric altogether. Extra threads are woven into velvet to create a luxurious “thread pile” that stands out from the weave. Fabrics like corduroy and wool are thick and opaque, but their highlights have a soft-to-the-touch look as each thread catches the light. Carpets, Jacquard velour, sheep’s wool, and felt are other materials that exhibit this soft textured highlight.

These velvet curtains are created with falloff in the Glow Channel, multiplied with a noise shader for a textured look. The same trick is applied to the felt top hat, and also the donkey’s fur. 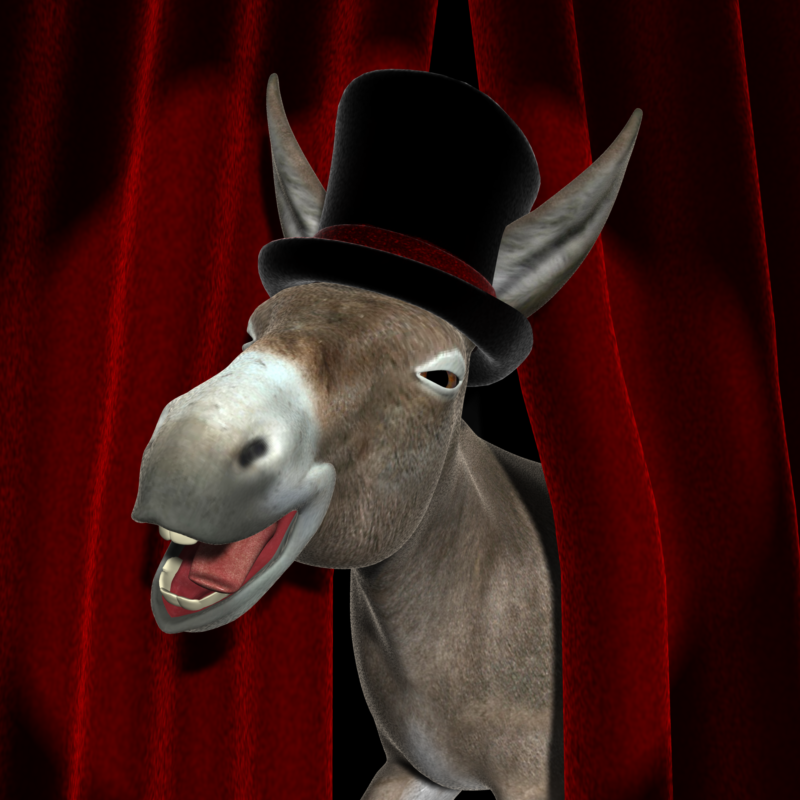