Earth is not just a surface and some clouds. It’s enveloped in discrete layers of transparent gas. Sunlight is refracted by the density of these layers; the shorter blue wavelengths are scattered first creating a noticeable sky blue “halo” that hugs the curve of the planet and is visible from space, especially in low-orbit when viewed to the horizon.

Adding the halo effect to your images is not only scientifically accurate, it creates a visual metaphor as well. The Earth glows 4x brighter than the moon. Against the cold darkness of space it becomes angelic, luminous, beautiful. Looking back at the Earth should have an emotional impact – it’s not just a ball of twisting coastlines and fractal clouds…, it is an oasis. It is home.

Primivol by inagoni is an intimidating plugin but it’s Volumetric Cloud primitive makes the perfect atmosphere. At it’s stripped-down “core” state, the Primivol Cloud is a simple sphere, a volumetric bubble. Scaled and positioned to match your planet, Primivol will naturally show a falloff “fresnel” effect appearing brighter and opaque around the edges the way the atmosphere should.

The trick to getting Primivol to appear as a clean bubble instead of a complex fractal cloud is to reveal the “core” shape of the sphere. All the noise Deformers which are designed to distort the cloud are removed, and the 3D Shape (which can be controlled either with a 3D shader or several built-in noise patterns) is “blanked out” by setting the pattern contrast to 100%. Even though it is difficult to visualize, it might help to imagine the Primivol Cloud to be a simple sphere model that is “displaced” through 3D noise patterns and/or revealed with shaders. By “blanking out” the built-in noise pattern, we essentially tell it to show and displace to 100% – in otherwords, to reveal the entire sphere fully. Even with the cloud centered and aligned with your planet, it can be a series of trial and error, render-scale-render-repeat, to discover where Primivol’s edge-transition falls in relation to the surface of the planet. Primivol’s complexity is compounded by multiple settings that work together as a system, as a result there is more than one way to control the size and transition of the sphere. This quick trick will help make scaling the atmosphere easier: select a model in the scene that Primivol will use as a reference. Here I have selected my planet model – a low-poly vertice sphere. This makes my Primivol “bubble” closely follow the geometry of my planet’s surface. Scaling Primivol larger and smaller, and the internal falloff settings, are now in relation to my planet’s surface.

There’s just one flaw in creating this atmosphere bubble: Primivol Clouds cannot receive scene shadows. That means our atmosphere will glow all the way around the planet, even on the night side where it should be completely dark. Primivol has an internal control panel to handle self-shadowing, either by referencing a single Distant Light in the scene (very slow) or by faking an internal direction light (faster, but still slow).

But these methods won’t work for us. Our atmosphere isn’t dense enough to absorb 100% of the light, and since it can’t “see” the solid planet we end up with a night sky that glows like neon. We want that glow on the day-side, and we need the bubble to remain mostly transparent. Don’t worry, I have another trick that will do the job – and much faster than calculating shadows.

In the Fall Off panel I’ve turned on the custom ramp off gradient for -Y Distance. Picture the Primivol core as a “ball”. The Ramp Off setting defines the visibility of the sphere along the Y axis: 0% is the “front” edge of the sphere (-Y), 100% is the “back” edge (+Y). Although my settings are obscured in this pic, my cloud is completely invisible up to the first 28% of the “ball” where I have set the low slider. The visibility smoothly ramps up to 49% (just short of center) where I have set the high slider. Beyond the high slider the back half of the ball is fully visible.

Depending on where my sun is in relation to the Primivol cloud, I could use the X axis or even the Z axis (if for some reason my planet has tipped over on its side). It doesn’t really matter, so long as the night side points away from my sun light it will appear as though the planet is casting a solid shadow. I set the high slider at 49%, not 50%, because it allows the glow to wrap slightly past the sunset line, as though light is being scattered in the upper atmosphere around the curve of the Earth.

If you don’t own Primivol, you may be tempted to try the above trick with Carrara’s volumetric Fog – but forget it. Like Primivol, Fog can glow and take the shape of a sphere. Unlike Primivol, there are no workarounds to get it to receive the planet’s shadow, and the Fog primitive is patchy and uneven – I couldn’t get it to look anything like an atmosphere. And there is another issue: Fog will cause other shaders to glow and doesn’t play nice with shader transparency, destroying your cloud shaders.

But Fog might make an interesting Aurora Borealis. Set to cylinder and aligned with the planet’s axis, Fog can mimic the Aurora’s eerie electric glow and curtain effect. It even animates. Carrara’s Fire primitive also works in cases where you would like the Aurora to be spikier. In either case I would probably still go with the superior Primivol, but hey, I’m trying to get to 10 here…. 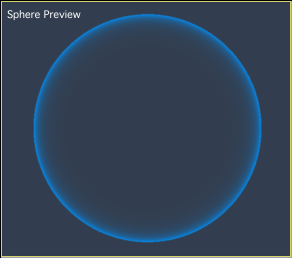 One final tip for creating an atmosphere requires a Falloff Shader like the one included in Shader Ops or Shoestring Shaders. Duplicate your cloud sphere but add a new shader: A light blue color chip is placed in the glow channel, and the Falloff Shader is added to the Alpha channel. In the case of Shader Ops you will need to add the Invert Shader to reverse the falloff so the edges are bright and the center is clear.

This essentially gives a similar look to our Primivol bubble above, but the effect is not volumetric. However, as a shader it may be easier to control. It might be possible to calculate Falloff in the transparency channel, complete with absorption and in-scattering, as well as subtle refraction to create various atmospheric effects, but in the image below I simply deleted the night-side of the sphere in the vertix modeler.